Change and Tolerance, is it really possible?

Wow! I’ve just spent one of (if not THE) the most memorable, educational, emotional and reflective weeks of my life on a field trip with the 7th and 8th Grade students from my school, and we aren’t even finished. We have traveled from Portland, Oregon to Birmingham, Montgomery, and Selma Alabama to tie up the Civil/Human/Women/Equal Rights unit that the kiddos had learned about in a long thematic unit earlier this year.

Believe me, with the stops we made, and the people we have listened to, this will be forever imbedded in my mind, heart and memory. Places such as, and not an all inclusive list are; The Dexter Ave. King Memorial Baptist Church, Southern Poverty Law Center (where our whole group took a vow of fighting any intolerance and hatred!), Dexter Parsonage Museum, Rosa Parks Museum, Freedom Rides Museum, 16th Street Baptist Church, Kelly Ingram Park, Gaston Hotel, Edmund Pettis Bridge, Judge Johnson’s Courtroom in the Federal District Courts of Alabama and so many more.
How can this Great country of ours, based upon “All Men Created Equal” have let this happen? And, more importantly how is it still happening to; African Americans, Muslims, Jews, Gay/Lesbian/Bi/Trans, Disabled, Children and Women...the victim list is endless now. I never imagined what I would have seen, felt, experienced and learned until I came face to face with it. Violence. Hatred. Disgust. Heroes. Courage. Shame. Risks. Death. Bigotry. Anger.

Just turn on the television, tap on the news on your device, or listen to the radio and you’ll hear or see it. It is everywhere, not just in the USA, but all over the world. My concern is with us, yes USA us. We have a President that excludes, we have active KKK groups, we have Neo Nazi groups, Anti Gay, Anti this, that and the other. What the heck people? Our friends at the Southern Poverty Law Center have identified 917 HATE GROUPS (click here) in the USA, as of today! What? Are you kidding me?


Didn’t we listen to the great Dr. King when he said, “I have a dream that my four little children will one day live in a nation where they will not be judged by the color of their skin, but by the content of their character”?
Well, I don’t think we did my friends. I get it, believe me I do. Parents have values that their parents and grandparents had. Kids adopt those values, follow their lead and keep the path going. But I say, we break the pattern and don’t do what’s easy. Let’s be kind. Gentle. Compassionate. Empathic. Loving. Peaceful. Embracing of differences. If we all did this, had our children do this, and kept the practice going, we might even be able to change.
But, it has to start with us. Now. Not tomorrow. Our kids deserve it. Our Heroes deserve it. 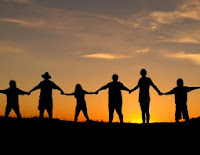 Words matter. Actions count. Gestures are meaningful.
No more jokes of color, race, gender, ability, language. Stop it Now. Break the chain and build a new one. Think of all the work that has been done in the short past of ours.
Do it. Now. For them. For us.

These people gave their lives to a cause, to freedom, to equality, and weren’t we supposed to support them? Help them? Keep the momentum going? What happened? Why is there still so much hatred, anger, bias and lack of understanding and compassion?
Our forefathers deserve it. Martin Luther King Jr., deserves it. Heck, we all do don’t we?
Join me my friends.
Posted by Jeff Kubiak at 5:57 PM